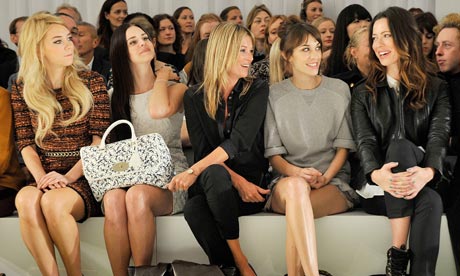 Much like a fashionable front row, innovative social enterprises are ahead of the consumer curve. Photograph: Dave M. Benett/Getty Images

While social enterprises often don’t have the same money or resource as mainstream companies, they are regularly innovating in different sectors and markets. Usually through creating something more ethical and socially sustainable and sometimes because their product or service also fills a gap and is somewhat ahead of the curve.

Social enterprise company Trabasack is a modest venture that produces laptop bags and rucksacks with built-in trays for computers and meals.

But, six years after the company was formed it has sold more than 4,000 bags and there still appears to be nothing similar on the market.

The social enterprise element becomes apparent when you talk to Duncan Edwards, one half of the husband-and-wife team who founded the company.

“We wanted something safe and practical for our son, who has severe epilepsy, to be able to use,” says Edwards. “So the tray has soft edges, is very lightweight and can be attached around the waist, so it stays in place, and is also a bag.

“We wanted something stylish and suitable for the mass market. So often, specialist items for people with disabilities are not desirable items, but this is popular in several markets – including workers on the go, who want a light laptop bag with instant and easy-to-use desk space,” he says.

The operation is run from a home office and Edwards is the only paid member of staff. Various jobs are outsourced to contractors as needed, but sales around the world continue apace, he says.

“It’s been a bit hard to get into the mainstream because we are split between two different markets,” says the social entrepreneur. “But, we have a new laptop bag called the Max, which is made from Hebrides’ Harris Tweed, and we think this might get us some way there.

“It was featured in GQ magazine in August. We’re just about breaking even, with me taking a small salary, and next year we are expecting to make a small profit – which will be reinvested,” says Edwards.

It’s hard to tell how much Trabasack’s designs are influencing other companies in this space. But for another social enterprise, eco clothing company Rapanui, it’s perhaps easier to see how its innovations might have a long-term influence. This time, in the fashion industry.

Based on the Isle of Wight, in an area where people struggle to get work out of season, the business employs 10 people and a number of apprentices. It creates Fairtrade and organic t-shirts and sweatshirts from bamboo, eucalyptus and cotton, using wind-powered factories.

Sales have been on an upwards curve since the company formed in 2008, with a turnover of £248,000 last year and a profit of 8% (profits are reinvested).

The clothes are not stocked by any major chains yet, but mainstream clothing companies are looking to this small island enterprise for lessons on sustainable clothing and supply chain transparency.

“We’ve had a number of meetings with big names, including M&S and H&M, and we’ve seen that they have used some of our systems. Although we created our ‘eco labelling’ concept, we’re happy to share because we want to make the clothing industry more transparent. The more people know, the better decisions they are able to make,” says co-founder Rob Drake-Knight.

The two main innovations have been a supplier traceability map, created using Google, which shows the entire supply chain of every product and the eco-labelling system, which makes clear how ethical a product is (in accordance with a range of standards) on a scale of A to G.

“It can be hard for bigger shops who are dealing with, say, 1,000 factories, to fully understand the supply chain. But they have the resources and the power over their suppliers to find this information out,” says Drake-Knight.

“In the same way that we see nutritional information on food, and energy information on electrical items, we want to see clear supply chain labelling on clothes. It’s a massive industry, worth more than $40m a year, and consumers have very little idea of what’s behind the things they’re buying. The map we’ve designed and the labelling system can make it easier,” he says.

Drake-Knight and his co-founder and brother, Martin, have approached members of the European parliament about their eco-labelling system and have so far received a good response. They want to see the labelling system used widely and potentially independently verified with some governance around it. Discussions are ongoing, with a live petition adding weight.

Social enterprises can be found innovating in a number of consumer markets, but it’s still somewhat rare for those innovations to be taken up by the mainstream.

Social enterprise Belu Water, however, has had some recent success in this area, through creating what it says is the lightest glass bottle available on the market, now being used by several large companies.

The company, which donates all profits to Water Aid, has collaborated with glass packaging company Rawlings, to produce the mineral water bottle. It will replace the current Belu glass bottles of both 750ml and 330ml and is 18% lighter than previous Belu bottles.

Belu estimates it will save 850,000 kg of glass annually, which is equivalent to 2.1m wine bottles.

In addition, a further royalty of up to 0.3 pence will be donated to WaterAid for each bottle purchased, expected to total a donation of £32,500 and changing the lives of 2,000 people currently living without clean water and sanitation, said a spokeswoman.

“The launch of what we have trademarked Ethical Glass is a really exciting example of where an environmentally focused brand like Belu can act as a catalyst within both its market and supply chain to drive change for good, and all involved.”

This content is brought to you by Guardian Professional. To join the social enterprise network, click here.