A quarter of Britons now work 30 hours or less, according to research. 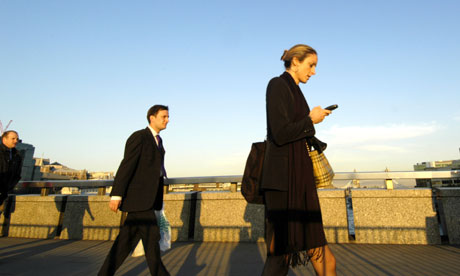 More than three quarters of part-time workers feel trapped in their jobs and unable to get promoted or find another flexible role that fits their skills, according to research.

A quarter of Britons now work 30 hours or less, but a survey of 1,000 employees earning the equivalent of £20,000 to £100,000 a year suggests those who have opted to do shorter working weeks often “hit a wall” and see their careers stall.

The research is included in a report by the Timewise Foundation, entitled The Flexibility Trap, published on Monday.

It said that only around 3% of UK job vacancies for part-time roles offered a pro-rata salary of £20,000 or more, and workers were being forced to lower their expectations when searching for work.

Seven in 10 of respondents said they had downgraded the salary and level of job they applied for, with the average salary sacrifice at £6,730. Employees with children expected to take home £436 less than those without.

Almost three-quarters of those interviewed by researchers said they haven’t been promoted since working part-time, with more than a fifth saying they wouldn’t expect to be. Yet more than a quarter said they are overqualified for the part-time role they currently hold.

Almost all (99%) said they wished employers would make it clear when advertising a job whether it can be worked part-time or flexibly, and there was uncertainty about at when it was right to ask.

“Work in the UK is undergoing a fundamental shift,” said Karen Mattison, co-founder of the Timewise Foundation, a business aimed at supporting part-time workers. Mattison added: “More than a quarter of UK workers are part-time or flexible, with most needing to fit their careers with something else in life. Yet millions are hitting a wall at key points in their careers, when they want to progress or move to a new role.”

Jaya Patel, 37, has two children under the age of six. She felt that working part-time in banking litigation made it extremely difficult to get a promotion. “When I had my first child the firm was shocked, but good about it. Upon my return, I negotiated flexible hours, which meant leaving at 5.30pm, with one day a week off. I agreed to log back on at home and work when necessary, but this happened almost every night,” she said

“Everything came to a head during my last appraisal. I was told that I needed to be seen pushing for counsel or partnership, and to achieve this I would need to spend at least four nights a week on marketing or business development.” Patel eventually decided on a career change, which involved taking a large pay cut. “I’m enjoying it. But it’s incredibly hard to find jobs that are openly part-time or flexible, from day one.”

Elizabeth Gardiner, head of policy at Working Families, said: “It may be the easy option to offer a vacancy on the same basis as the last full-time job, but there is a business case for changing practice. Failing to advertise jobs as available on a part-time or flexible basis means employers are recruiting from a limited talent pool, and skilled part-time workers are less able to advance their careers.”

Gardiner said she wanted all jobs to be advertised on a flexible, part-time or job share basis, hoped employers would adopt a “happy to talk flexible working” strapline to include in job adverts.

“Using the strapline would encourage employers to consider job design, signal their willingness to discuss outputs not hours, and give more employees the confidence to ask for a pattern of work that suits them,” she said.

via Part-time workers ‘trapped’ in jobs with no chance of promotion | Money | The Guardian.