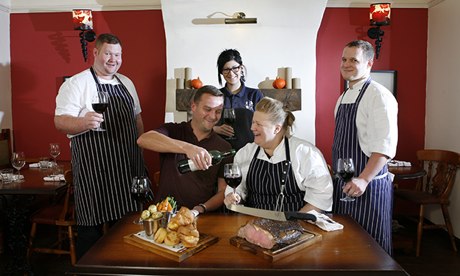 Overlooking the former market town of Ramsbottom in the West Pennines, the Eagle & Child has been transformed since reopening two years ago. The gastro pub quickly won awards, but thats only part of the story: its an example of the wider role a pub can play in society.

Countless community pubs have closed in recent years, and Glen Duckett was determined to revive one, searching Lancashire before finding the Eagle & Child, which had been empty for 18 months.

Originally from nearby Accrington, Duckett cooked at Delia Smiths brasserie at Norwich City FC after university, before going on to work in youth justice at Gateshead Council, and as community regeneration manager at Leeds charity, Groundwork. The Eagle & Child weaves together both aspects of his CV, via a home-grown scheme called “EAT Pennines”, which helps unemployed under-25s into work, particularly those most disadvantaged, including young offenders or those with a disability. Duckett works with students from Hopwood Hall College, Bury College, and the charity Nacro, which supports youngsters at risk of offending. Theyve already helped more than 20 people into work, and currently have a dozen on staff. “Weve got the highest youth unemployment ever,” explains Duckett. “My ethos is to provide some support.

“None of that would really work if the food wasnt of high quality. The menu concentrates on locally sourced and seasonal Pennine foods such as Lancashire hotpot with braised red cabbage, or black pudding sausage roll with pickled quails egg. Sunday lunch has been the huge hit, its stalwarts being sirloin of Lancashire beef and chicken from nearby Goosnargh. Some diners are unaware of their good works.

“Theres support,” says Duckett, “but plenty of other people are happy to come in for a great lunch.