By Lydia ThomasYou and Yours, Radio 4 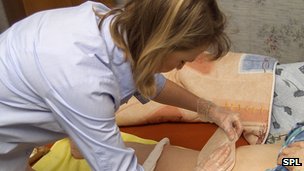 NHS patients who have had colostomies are being sent unwanted medical equipment, an investigation by Radio 4′s You and Yours has found.

It revealed that some suppliers delivered unneeded accessories to stoma patients, where nursing jobs are paid for by medical manufacturers.

The Department of Health said patients should order only the items they need.

Stoma care refers to the care required by patients who have had colostomies and other similar procedures, in which a piece of the large intestine or colon is diverted to an opening in the abdominal wall, known as a stoma.

Phillip Sommerich had an ileostomy operation 18 months ago – a surgical procedure which links the end of the small intestine to an opening in the abdomen, and began to receive calls from suppliers who asked him whether it was time for him to order more equipment.

Every delivery was accompanied by new, full sets of disposal bags, deodorants, air fresheners and wet wipes – which he has now amassed into a collection in a drawer.

He said: “The nurses were wonderful at teaching me how to deal with the bag, but every order came with more accessories.

“Presumably it’s not the supplier paying, ultimately the NHS does. My worry is that somewhere else along the line there will be cuts.”

Pat Black is a consultant stoma nurse who has studied the huge growth in prescribing accessories to stoma patients. The results of her research are soon to be published in the British Journal of Nursing.

She said: “We have a lot of quite young and often inexperienced nurses who are sponsored, and they are having their arm twisted to use more from the company that sponsors them.”

To tackle the problem ex-patient Neil Basil set up a not-for-profit delivery company for stoma products called the Patient Choice Foundation which is independent of any medical manufacturer.

He said: “The home delivery company is the direct route that the patients get their medical appliances from. The actual decision of whether patients should be receiving the items or not isn’t being conducted in a clinical fashion.”

You and Yours asked the Department of Health how many sponsored nurses were employed across NHS departments, but they were unable to provide the information.

The Royal College of Nursing and The Nursing and Midwifery Council were also unable to give a figure.