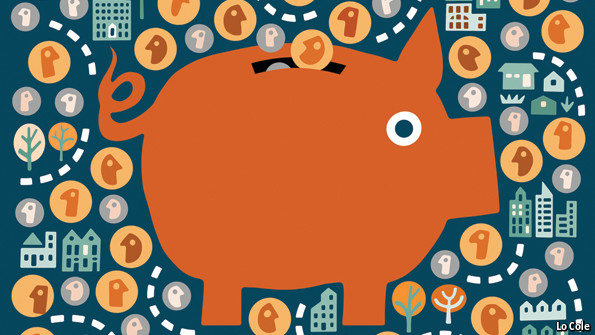 NAMES, wedding dates and declarations of love cover the Luchtsingel, a new pedestrian walkway straddling a busy main road in central Rotterdam, a Dutch city. Asked by a website to help fund the project, locals paid €25 ($32) each for the right to etch a message on one of its 17,000 wooden planks.

The walkway’s length, they were warned, depended on the volume of donations. Within three months do-gooders had stumped up a third of the cash needed to build its full 350-metre span (a government award has since topped that up). Had they left council bean-counters to plan it, says Kristian Koreman, its architect, Rotterdam’s residents might have waited two decades to get their bridge off the ground.

In this section
Breaking ground
A warmer welcome
Westward Ho!
Reprints
Related topics
Kickstarter Inc.
Rotterdam
Civic-minded citizens have long propped up ventures that authorities covet but cannot afford. In 1885 cash from more than 120,000 Americans helped New York build the pedestal for the Statue of Liberty (Joseph Pulitzer, a newspaperman, led the whip-round). Now, as cash-strapped councils slash their budgets, locals are again relying on private gifts to spruce up parks, playgrounds and public loos. Web start-ups inspired by Kickstarter, a crowdfunding site which helps artists, game-designers and gadget-makers find patrons, are helping locals raise cash for improvements to their neighbourhoods.

Spacehive, a British site for urban projects, is one of the busiest of these. In March 2012 citizens of Glyncoch, a former mining village in Wales, used it to collect £28,000 ($43,000) to finish a community centre. Visitors to the site have shelled out part of the cash to bring free wireless internet to the centre of Mansfield, in England, and helped Edinburgh’s locals convert a disused phone box into a tiny art gallery.

Donors are charged only when the project reaches its funding target. Spacehive then takes a small cut from the money raised. Most patrons receive no return on their pledge, though Neighbor.ly, an American competitor, supplies perks like posters and plaques. Other platforms include Citizinvestor; groundUP, which launches this summer; and UrbanKIT, based in Chile.

Ventures need careful vetting. Plans to create a park on a vacant lot will stall if neighbours or officials disapprove. Spacehive asks project leaders to seek backing from a charity or trade association to verify that their venture is beneficial and achievable (they earn a fee for their assistance if the money is raised). Citizinvestor promotes only projects put forward by councils. It has worked with four American cities and is talking to 40 more, says Jordan Raynor, a co-founder.

Mr Raynor dreams of turning ordinary burghers into “Carnegies and Rockefellers”. Projects listed on crowdfunding sites do often rely on big gifts from businesses and foundations to reach their funding targets. But that does not undermine the model: enthusiasm from dozens of small contributors can spur generosity from big ones. Jase Wilson, the founder of Neighbor.ly, says rich companies like to match citizen donations. A meaty catalogue of worthy causes could connect global firms with cheap but important projects in unglamorous places. Corporate support may also save crowdfunding sites from having to take cash from successful projects (in the form of fees) to stay in business.

Making waves
As online crowdfunding matures, its advocates are becoming more ambitious. Three designers want to float the +Pool, an open-air swimming bath in New York’s East River, with clever filters to purify its murky water. In 2011 its creators raised $40,000 from Kickstarter users in just six days; in June they will ask for $250,000 more. They hope crowdfunding will cover much of the project’s $15m price tag.

Critics point out that crowds are easily excited by such novel installations. Boring but functional infrastructure that could most improve an area, such as roads and parking places, will be a harder sell. A deeper worry is that money from crowdfunders will prompt councils to cut spending on public spaces. That will hurt particularly poor neighbourhoods, which mostly lack the spare cash, know-how or time to get involved.

Enthusiasts counter that such sites will improve local government, not just help fund it. Only truly popular ventures get funded, not officials’ pet projects. Boosters think pioneering councils might one day allow citizens to use crowdfunding sites to allocate a portion of their own tax dollars to causes that they support.

Advocates also want to shake up dusty processes. “The only people who go to planning meetings want projects to stop,” says Andrew Teacher of Spacehive. Bryan Boyer of Brickstarter, a civic research project funded by Finland’s government, would like to “turn NIMBYs into YIMBYs” (Yes In My Back Yard). He hopes crowdfunding will not only help residents plan small developments, but also finance the surveys and audits to persuade governments to consider bigger ones. Rotterdam’s walkway is built to last only about 20 years; but by promoting local regeneration the venture will help future governments find funds for a grander version.

Deloitte, an accounting firm, reckons web users will plough about $3 billion into crowdfunded schemes in 2013. About $500m of that will be given freely to groups that offer no equity or products in return. Urban ventures are still only a sliver of that. But if grumblers accuse the internet of destroying trade on the high street and of blunting interest in local issues, crowdfunding schemes are doing the opposite. An idea to buy into.